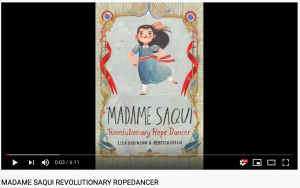 MADAME SAQUI: REVOLUTIONARY ROPEDANCER tells the true tale of a woman during revolutionary era France who wirewalked over the Seine and between the towers of Notre Dame. As a result of her daring feats on the wire, she became a darling of Paris and of Emperor Napoleon Bonaparte. She walked on the wire into her seventies . . . and she never fell.